With China in the spotlight, we look at three ways in which the country can shape the dry bulk freight market in the coming months:

1. Coal. How will import volumes be shaped ahead of what is expected to be a severe winter given international and domestic supply tightness? What is the impact of soaring energy costs on end-user demand?
2. Controls. What is behind the slump in apparent steel consumption from a peak of 95 Mt in May to 70 Mt in September? Is there scope for a rebound, and, if so, when?
3. Queues. The role of port congestion.

Coal
Affecting demand for all vessel sizes in the Pacific is the pace of Chinese coal imports.
Government interventions in China during the final week of October aimed at lowering record domestic coal prices and reducing energy costs ahead of an anticipated second consecutive severe winter has resulted in a slide in prices. In the face of less activity from end-users, an IHS report from 29 October commented most Chinese buyers chose to wait until “a clearer picture emerges on the domestic market”.

The lull in purchasing activity pulled both delivered prices of imported coal and the Pacific sub-Cape freight market lower. At end-October Indonesian low-rank (3,800kc NAR) coal was reported at approximately $155/t for November delivery in China, marking a weekly slump of nearly $30/t (though the price was still at a multiple of 2020 levels).

Controls
Conversely, last month’s Capesize spike was heavily influenced by a shortage of ballasting spot and dedicated tonnage entering the South Atlantic at a time of seasonally higher Brazilian iron ore supply, steel fundamentals in China were deteriorating at the same time. 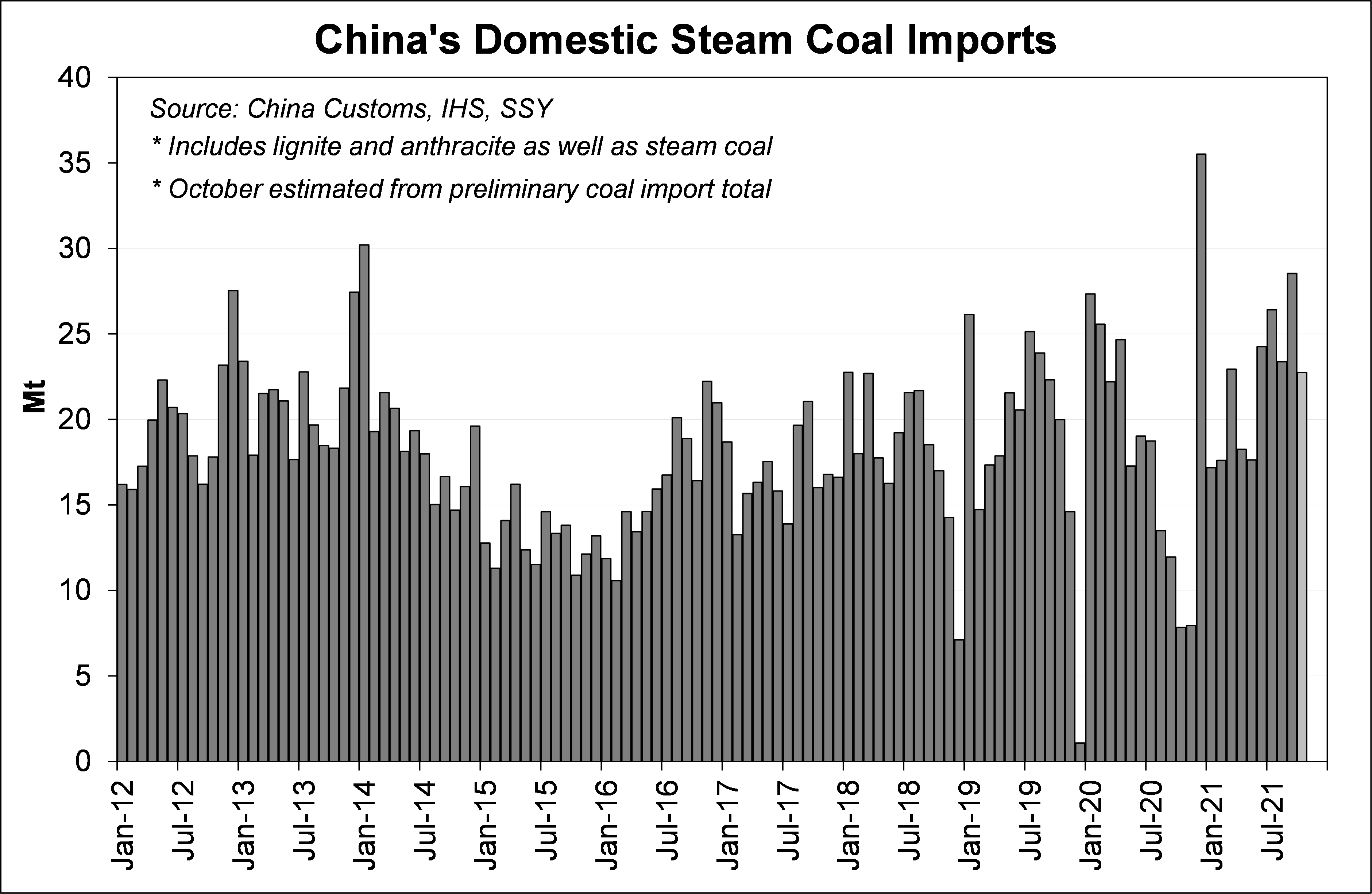 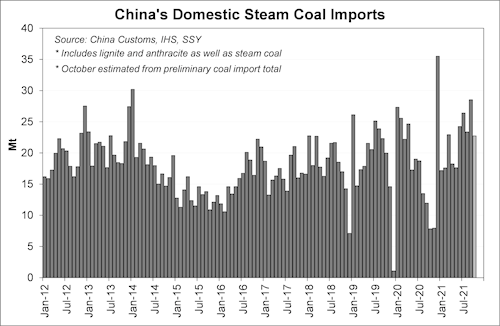 As well as the usual efforts aimed at combatting winter air pollution in areas of North China, steel production controls were apparently introduced in mid-2021 and aimed to limit full-year output at 2020 levels. As 1h21 production had already risen 60 Mt year-on-year, to meet this goal a 60 Mt annual drop was required in the 2h21. Thanks to the subsequent steep drop in the 3q, an annual decline of around 20 Mt is required during the 4q for the 2021 full-year total to achieve parity with 2020.

The effect on apparent steel consumption (production plus imports minus exports) has been dramatic. As the chart on page 2 shows, the seasonal pattern of winter troughs (influenced by anti-pollution controls) and summer peaks has been interrupted this year.
Already imports of iron ore into China fell year-on-year by 47 Mt in April-September inclusive (to 559 Mt), while stockpiles at 42 ports surveyed by Umetal gained 15 Mt in the five weeks to 29 October.

Downstream steel demand has softened. Disappointing GDP data for the 3q coincided with uncertainties caused by Evergrande’s debt crisis. Having been resilient until mid-October, the price of rebar steel in China softened from $780/t to $664/t by 3 November.

Further clouding the outlook has been the timing of the Beijing Winter Olympics in February 2022 with several events held in Hebei province, the leading province for steelmaking. True to form, extended restrictions on steel production and iron ore sintering during the 1q22 have already been announced, which threaten steelmaking raw material demand and affect the capacity for mills to lift output once 2021 restrictions expire.

Following the extraordinary 100 Mt growth in China’s iron ore imports in 2020, this year trade growth has been driven by the rest of the world. As previously highlighted by SSY, trade data show imports into Japan and South Korea reached an aggregate 123.5 Mt in the first eight months of this year, representing an annual gain of almost 22 Mt. Meanwhile, imports into the EU in January-July gained 11.1 Mt annually to 54.6 Mt.

Queues
Much of the Atlantic-led Capesize spike in early October owed to a reduced flow of both dedicated and spot tonnage into the basin. With ballaster arrivals on the increase once more, some rebalancing of tonnage between the basins has taken place.

Lower levels of port congestion in China for Panamaxes by the end of October may have been influenced by fewer inbound grain-carrying vessels from the US Gulf during Hurricane Ida as well as from a poor corn crop from Brazil, plus a spell of more benign weather conditions. Some 75-80 laden Panamax vessels were at anchor at Chinese ports, down from around 100 in mid-October and as many as 150-160 in August (when high arrivals and storage space issues combined with Covid-related disruption to absorb tonnage).

In terms of port congestion, the onset of winter can be expected to add to turnaround times in China.

Conclusions
The erosion of sub-Capesize market strength in the Pacific is a reflection of Chinese coal market dynamics and took place at a time when other freight market drivers had weakened.

These include (1) a lower availability of Indian iron ore compared with the 1h21, (2) seasonal lulls in both Australian wheat and Philippine nickel ore exports, plus (3) Indian coastal power plants have been burning less imported coal with generation increasing at plants powered by domestic coal.
The potential for a revival of Chinese coal imports in the winter months will be shaped by domestic coal supply. A change in trade dynamics into China could be one of the ingredients for freight market volatility (with a bumper Australian wheat crop soon to lift geared vessel demand).

We anticipate further distortion in steel production levels in coming months and note that weather-related port congestion could re-emerge. We attribute greater likelihood to a freight market revival from coal imports into China than iron ore.

SSY Consultancy & Research
While every care has been taken to ensure that the information in this publication is accurate, SSY can accept no responsibility for any errors or omissions or any consequences arising therefrom. Figures are based on the latest available information, which is subject to subsequent revision and correction. The views expressed are those of SSY Consultancy and Research Ltd and do not necessarily reflect the views of any other associated company. Reproducing any material from this report without permission from SSY is strictly prohibited. Please click here to view our terms and conditions in section 6.2.